BlueZone Group supports the development of all markets in Australia where our instruments and technology are deployed. We engage with local organisations and societies to support the development of knowledge and “lessons-learned” to increase the effectiveness of all our customers.

ADCPs In Action in Australia 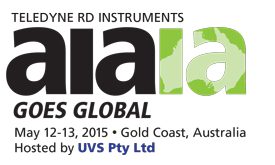 Joining with a long-term partner, Teledyne RDI Instruments, BlueZone has conducted three “ADCPs in Action” events in Australia. These events offer the ADCP community in Australia, a unique venue for discussing applications and lessons learned from operating ADCPs “down under”. ADCPs in Action represent an outstanding opportunity to network, share information and learn about new and innovative uses of ADCPs for scientific, commercial and military applications.

BlueZone is a corporate member of the Australasian Hydrographic Society. The AHS is the South-West Pacific and South-East Asian regional focus for those interested in hydrography and related sciences. Its objectives are to promote the science of surveying, and the exchange of information and knowledge between technologists and others involved in hydrography. The AHS aims to promote better education and training of persons engaged in the study of hydrography and related sciences.

BlueZone is proud to be included in the “Bright Thinkers” group of conscientious companies, creating a brighter world with solar energy. In January 2105, a 10kW solar system was installed at the BlueZone facility in Newcastle, NSW, that creates enough energy from the sun to run the peak load of the office and factory. The system will generate reliable electricity for over 25 years and provide clean energy for both BlueZone and society in general.

SC21 is a global benchmark of supply chain excellence, derived from the UK 21st Century Supply Chain program and licensed in Australia as the Supplier Continuous Improvement Program (SCIP). BlueZone Group company and ATSA Defence Services have been a member of SCIP since March 2011. 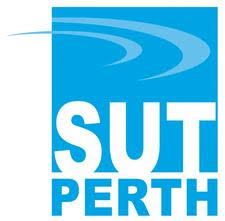 BlueZone is a corporate member of the Perth Branch of the Society for Underwater Technology (SUT) which was formed in 2004. The SUT was founded to promote further understanding of the underwater environment and to encourage:

Read More: Autonomous Underwater Technology Seminar
Read More: TheAge of the MiniROV
Read More: FLNG and what it means for the Subsea Industry 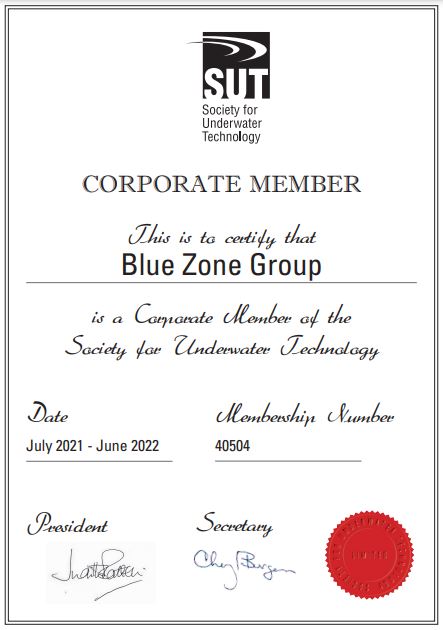 The Submarine Institute of Australia is the nation’s premier organisation for the promotion of submarine matters. Established in 1999, the SIA has a vision that builds on the centenary of submarines (1914-2014). While the participation of submarines was periodic in their first 100 years of RAN history, the second 100 years require a determined and successful approach to sustaining and growing Australia’s submarine capability. BlueZone is a corporate member of the Submarine Institute of Australia, and regularly participates in and sponsors SIA activities. BlueZone Group has been a supplier to the COLLINS Class submarine project from the original construction when SOURIAU through-hull perpetrators were specified for many critical applications for electrical and fibre-optic connectivity through the submarine hull. 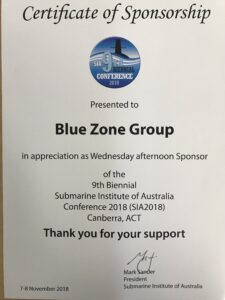 Submarines under the sea operate in a heterogeneous three-dimensional world. Knowledge of the environment is extremely important for operations, as sensor efficiency is directly related to underwater sound propagation. Expendable Bathythermograph (XBT) technology, first developed in the 1960s, is the principal method used by submarines to collect data on the thermal profile of the immediate operating environment. The paper below proposes that the use of micro Unmanned Underwater Vehicles (UUV), has the potential to provide both an enhanced XBT function and significant other capabilities for a submarine. 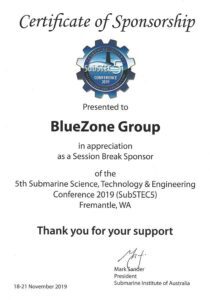 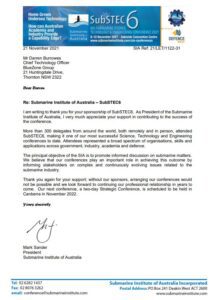 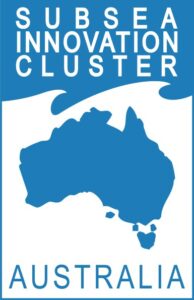 In 2018, BlueZone Group joined with other Australian companies and research institutions to form Australia’s first Subsea Cluster: Subsea Innovation Cluster Australia (SICA). The cluster was founded with an initial focus on subsea Inspection, Maintenance & Repair (IMR). SICA is operated and managed in Perth, with strong support from Subsea Energy Australia (SEA). From the BlueZone Group office in Perth, BlueZone actively participates in SICA and supports the SICA vision to be the Asia Pacific centre of expertise in subsea IMR technology & services. BlueZone is pleased to join with other companies across the whole subsea value chain, attracting capital, knowledge & skilled individuals.

The Surveying & Spatial Sciences Institute (SSSI) is the national peak body catering for the professional people who make up the spatial information industry. BlueZone Group sponsors the Hydrography Commission within the SSSI. The hydrographic surveyor is a specialist in precise positioning and data acquisition in marine environments, expected to work in a wide range of different situations and applications, from inland waters and rivers to ports and the deep oceans. BlueZone is proud to be a supplier of leading-edge equipment, systems, application engineering and training for hydrographic surveyor specialists. Our wide product portfolio supplied by global leaders is supported by local service and training enabling hydrographic surveyors to achieve their survey tasks.

BlueZone has been a regular attendee in San Diego since the Teledyne Marine Technology Workshop was “ADCPs In Action”. Through sponsorship of researchers such as David Williams (Australian Institute of Marine Science – Darwin), BlueZone has contributed to the exchange of ideas, applications and development of ADCPs for use in marine and river applications. In 2017, the largest ever delegation from the BlueZone Group travelled across the Pacific in October for the 2017 Teledyne Marine Technology Workshop held in San Diego. With multiple concurrent tracks across the marine world including marine measurements, water resources and Defence & security, there was plenty of information to take in for the BlueZone team to support future customer applications. The busy conference program was supported by a comprehensive on-water demonstration schedule that included a demonstration of many integrated systems developed from the extensive Teledyne Marine product portfolio.